Posted on September 8, 2017 by deconstructingdoctor 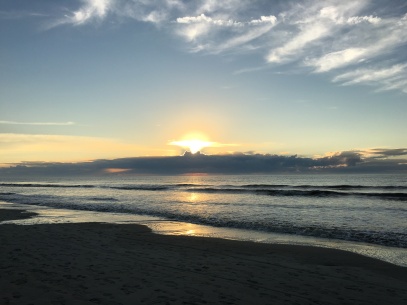 You really can’t understand the mentality of a Floridian unless you are one.  You could never really imagine what it’s like standing on your front porch while a hurricane bears down on you from all sides.  Witnessing the shear power of the wind to bend and twist, to unearth and shred the steadfast landmarks of your life until nothing familiar remains.  The sound is reminiscent of a freight train barreling down the tracks at full speed while you are tied to them.  You hope you are tied to them, anyway, lest you be pulled into the vortex.  Only in the very beginnings of the storm can one truly witness this.  To be out too long in the weather would be deadly.  The fear starts to overcome the curiosity.  There is a perceptible change in barometric pressure and the deepest parts of the brain send chemicals to the rest of the body signaling –it’s time to go, this shit’s about to get real.

If you haven’t lived through a hurricane, you could never understand the feeling of being equal parts afraid for your life and more alive than you’ve ever been.  It’s exhilarating and horrifying.

I’ve been there.  I’ve done that, and to be honest, I never want to do it again.

I feel a kindred spirit with my Floridian sisters and brothers who chose to stay despite the dire warnings.  There is a undeniable urge to bear witness.  Not so much for the spectacle, but because it feels like it’s part of the plan.  This is your home, your stuff, your family, your neighborhood, your neighbors.  There is a need to be there for each other, to hunker down, survive, crawl from the wreckage, and rebuild, together.

Life is like that.  We must be there for each other in the good times and the bad.  And even more so in the bad.  When it’s bad, that’s the signal to step up and do the right thing.  Humans have survived through the millennia because we discovered that there is strength in numbers.  We are better when we are numerous.  We are better when we work together for a common goal -to survive.

After the storm, it is eery.  It is too quiet.  Even the birds are gone.  People start to move out of their shelters, slowly at first, cautious steps into an alien world.  The sky is grey -lined with white clouds in strips moving outward like ripples in a pond.  There is a cool crispness in the air.  That’s strange, but welcoming since the air conditioning will likely not crank on for weeks.  Nothing is as it was.  It’s as if the great winds had blown the entire town backwards in time, before cars and power and cell phones and grocery stores and shampoo and running water.  It’s like starting over from scratch.

After the storm, the first place I wanted to see was the beach.  I wanted to stand at the place where the storm came ashore and tried to tear my town apart.  It missed by about 50 miles and I wanted to tell it so.  I stayed.  You missed.  This time.  Standing there, I knew we got lucky.  The ocean was still angry, the beach sand now covering the roads, dotted by unrecognizable twisted bits and pieces of condos, as if thrown about by a toddler in a tantrum.

Looking at the ocean, I had faced the fear, but still felt fearful.  I would never do this again.  The next time, I knew, I would leave.