Posted on January 31, 2017 by deconstructingdoctor 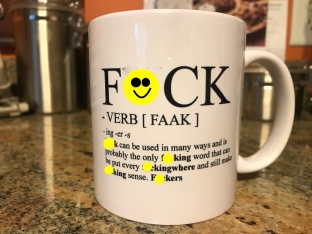 In our house, the “F” word is Fart.  That was until Christmas day.

My husband has a few rules about bad words.  He doesn’t like the kids to say Butt, Fart, or Stupid.  I get it.  Hearing a 5 year old say Stupid just seems wrong.  It’s rude.  It’s harsh.  We don’t say that to them or to each other.  We try our gosh darnedest not to say it about others (in the kids’ presence anyway).

He has one rule for me.  He doesn’t like it when I say GD.  You guys know what I’m referring to, right?  I can say Gosh Darn, the more acceptable cousin of GD, but not GD.  Now, he would never tell me I can’t say GD, but the look of absolute betrayal and disappointment on his face when I do say it, has cured me of ever saying it again.  Ever.  Except when I’m so enraged that it just slips out.  Oops.

He never says bad words.  And when he does, it’s equal parts shocking and humorous.  He’s just not the bad word type.  It doesn’t suit him.  He’s that good.  Me, on the other hand, I am the bad word type.  Through and through.  They suit me just fine.  It’s like a natural extension of my inner being.

Which brings me back to Christmas.  I unknowingly unwrapped a coffee cup that my husband bought me that had the real “F” word written all over it.  Like 5 times.  The kids took one look at that cup and were mesmerized.  Being 8 and 5, they can now read so they knew exactly what it said.  It instantly changed their perception of the “F” word.  Fart lost all of its powers of infatuation.  The new “F” word has since taken over.  They want to talk about the cup daddy bought mommy -all the time.  I’ve hidden it deep in the cabinets and told them it will only come out when they are 18.

The oldest informed me that he told his Sunday School teacher about the infamous cup that daddy bought mommy for Christmas.  Then I informed daddy.  And daddy looked like he wanted to puke.

17 Responses to The F Word