Posted on June 11, 2017 by deconstructingdoctor 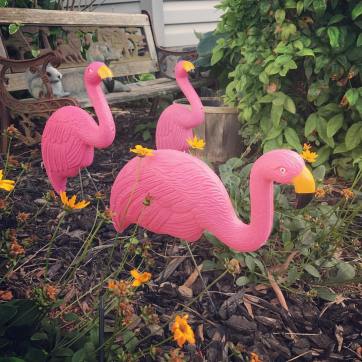 A funny thing happened when our family returned home from a week long trip to Disney World.

We spent the entire week living out of our RV in what I would consider the epitome of RV parks, Disney’s Fort Wilderness.  One week there will ruin you for any RV park anywhere.  RV parks aren’t exactly known for their plush surroundings.  In fact, prior to owning an RV, I pretty much thought RV parks were seriously tacky.  My opinion hasn’t changed much.  I have embraced the tacky.

Disney’s version of an RV park is clean, perfect WiFi, snack bars, restaurants, boat rides, golf cart rentals, a plethora of wild animals (deer, bunnies, squirrels, frogs, lizards, armadillos, and possums -were just a few that we saw), shopping, groceries, sing-a-longs, and outdoor movies and s’mores with Chip and Dale.  I think what I like most about Disney’s RV park is that no one actually lives there, they just visit and then move on.  Other RV parks get a little weird.  People live in mobile units that are meant for the open road, but they park them and put out pink flamingoes and garden gnomes.  They don’t leave.  They stay.  I find that weird.

I find it so weird, that I think I could do it, too.  My husband and I talk about it on occasion.  When the kids go to college, we could sell everything, downsize our current RV (it sleeps about 10, rather uncomfortably), and hit the road.  We could stay at campsites along the interstate or at the beach.  We could drive to California and ride up the west coast through Canada.  Anything is possible when you are driving your house down the interstate.  We could stay in the mountains during the summer and the beach during the winter.  We could stay put for a while and put out pink flamingoes, then pull them up, pack them under the coach and drive to the next destination.  Nomads.  Adventurers.  Road Warriors.  Imagine the possibilities!

We spent a week in pretty close quarters when we weren’t fighting the crowds at the parks.  Our hot water heater didn’t work and the kitchen sink sprung a leak, but the toilet worked magnificently!!  That wasn’t the case the last time we went to Disney.  We discovered on the first day that toilet paper got stuck somewhere in the pipes and backed everything up.  So the toilet paper had to be bagged and not flushed.  Ewwwwww.

RV life isn’t for the faint of heart.

Four people living in about 300 square feet of space for 7 days.  Without a kitchen sink or hot shower.  You get kind of used to it.  When we got home, we unpacked our clothes, food, and toiletries.  I took a hot shower.

Everyone was exhausted from the drive and the week of nonstop activity from sunup to sundown.  I found myself relaxing on the couch with a book, my husband had fallen asleep on the chaise part of the couch and both of my kids sat next to me playing on their iPads.

After 7 days in close quarters, a funny thing happened, we found ourselves not dispersed to our corners of the house, but sitting inches apart from one another on the couch.  I know it won’t always be like this, at some point my 8 and 6 year old will be 15 and 13.  They won’t want to be with mom and dad in an RV.  They won’t want to sit next to us on the couch.  They probably won’t want to go to Disney World anymore.  In that moment, alone in my realization, I breathed it in and held it in my chest for a moment.  Trying to make time stand still, putting a little pink flamingo of memory in the tacky RV park of my mind.