Posted on July 3, 2016 by deconstructingdoctor 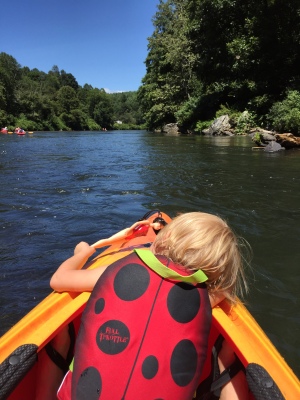 I live in an area where “Lake Life” is a thing.  I don’t really get it.  You see, I grew up with the ocean practically in my backyard, a mere bike ride away.  The ocean dwarfs any other body of water.  It kicks its ass.  You can have your lake, I’ll take the ocean any day.

The “Lake Life” is actually a little amusing.  The lake near us is manmade and is used as a source of cooling water for the nuclear power plant that sits right next to it.  The people that live on the lake are incredibly wealthy.  Most of these homes are worth millions of dollars.  There is a culture around the lake and I admit I participate in it:  fishing, boating, kayaking, swimming.

I just like water in general.  If I can’t have the ocean, the lake is a viable alternative.

There are rivers, too.  Our family enjoys all the summer activities in the water.  It’s fun, relaxing, and we are carefree.

Except now, a young woman has died after a trip to a local waterpark.  And not in the most common way either, like drowning.  It was from an amoeba.  I little tiny microscopic blob that found its way into her nasal passageways, up her olfactory nerve, and into her brain.

The amoeba is officially called Naegleria fowleri and can be found in warm bodies of water like lakes and shallow slow moving rivers, at the runoff of power plants, in natural warm springs and generally in warm untreated waters.  Typically the mode of entry is through the nose.  The amoeba produces enzymes that dissolve proteins in the brain resulting in a brain disorder called primary amoebic meningoencephalitis (PAM).

It is thought that the infection is rare, affecting between 0-8 people per summer.  The amoeba is found commonly in the environment, but rarely causes disease.  Most cases have occurred in Texas and Florida, but any Southern or Southwestern states are vulnerable from July-September.

The unfortunate young woman contracted the amoeba at the U.S. National Whitewater Center (USNWC) in Charlotte, NC.  They have since shut down all water activities.

She was there with her church youth group.  She was 18 and healthy.  She loved the outdoors and was concerned about the environment.

Jeffrey T. Wise, the CEO of the USNWC  writes in a statement on the company website, “Long before the Center was built, we worked with state and local health officials to determine the appropriate measures to use for water quality. Everyone recognized this was not a pool or a natural river and therefore would present its own unique circumstances. We installed and maintain a state of the art filtration system and ultraviolet radiation treatment system that continuously treats the 12 million gallons of water every 24 hours in addition to supplemental chlorine treatments. Our weekly water tests are conducted by a third party laboratory and we have remained in compliance with all standards and guidelines.”

According to the CDC, this is not an amoeba outbreak, but for one family, this is an unbearable heartbreak.

The USNWC along with the local health department and government officials are working to come up with a plan to avoid future infections by revisiting the use of their water treatment systems and developing more effective ways to keep the public safe from Naegleria fowler.

For now, it is recommended that persons wear nose clips to avoid contamination in the nasal passageways when participating in water sports in potential amoeba-containing waters.  It is also recommended to avoid submerging the head or nose in the water.